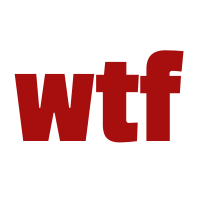 I write this mostly for illustrative purposes, for the sake of convenience of argumentation. I’d like to go through two cases from usual for Ukraine business practice and suggest my comments along the way.

Case of Nova Poshta vs SSUFSCP (State Service of Ukraine on Food Safety and Consumer Protection).

Nova Poshta (further referred as NP)- is a logistics company, probably the most popular in Ukraine. The group is huge by Ukrainian standards (they claim to employ 30K+ of people and to have paid the equivalent of roughly USD 185M+ in taxes for the year 2020.

SSUFSCP – this particular agency has wide and vaguely written authority, which include, among other things, the processing of consumer complaints regarding goods and/or services.

Plot: In July 2021, SSUFSCP made simultaneous inspections of two branches of NP in neighboring cities. The bases for inspections were allegedly two customers complaints: one regarding the dispute with NP on who should pay roughly USD 20.00 (twenty bucks) for the broken fish tank during delivery and the other dispute on the correctness of delivery tarif (amount is unspecified). As the result of two inspections, SSUFSCP fined NP with UAH325 million, which is roughly USD12M+

Here we can observe the classic tactics of Ukrainian government authority body: “Charge the highest fine and bargain after”. Big numbers are not accidental by any means, they are to raise the risk and the cost of resistance. NP is a systemic business, they probably had a plan for such cases and the PR department. They brought it up to social media with their PR-chief and the co-founder as well as a number of well-known business people. 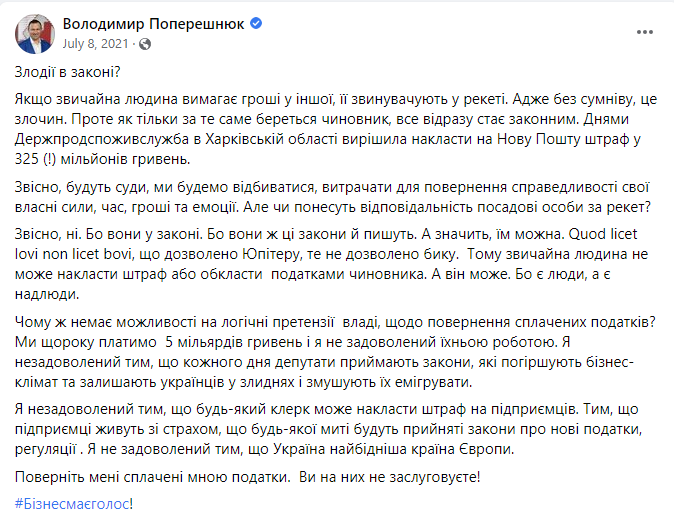 Shortly after they met with the head of SSUFSCP who had to step in personally. But it’s more likely that it was the unpublic pressure from someone towards her to back down. And NP co-founder had declared “victory” so to speak. 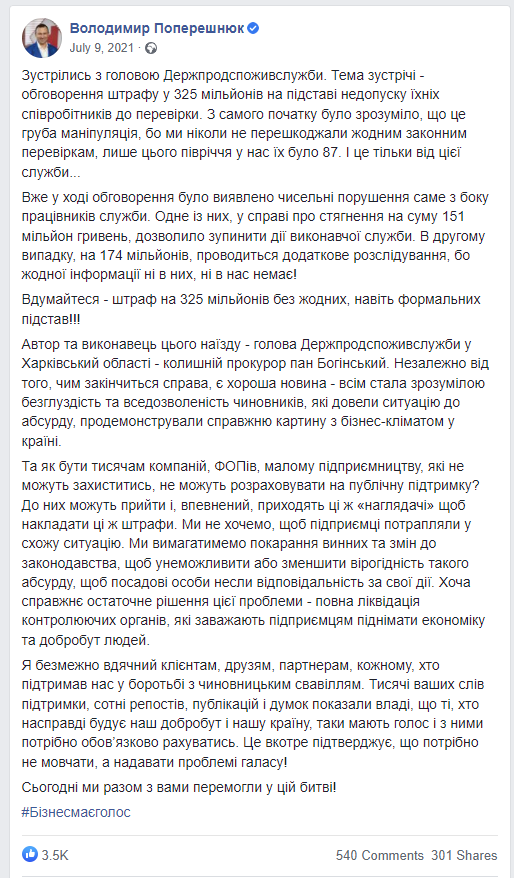 As the result of extremely dense PR campaign with social media and mass media in general, and, I would speculate that with pressure through MPs as well – the SSUFSCP in official statement didn’t deny any of presented facts and had called off the fines. With no apology and not without some hidden victim-blaming of course. 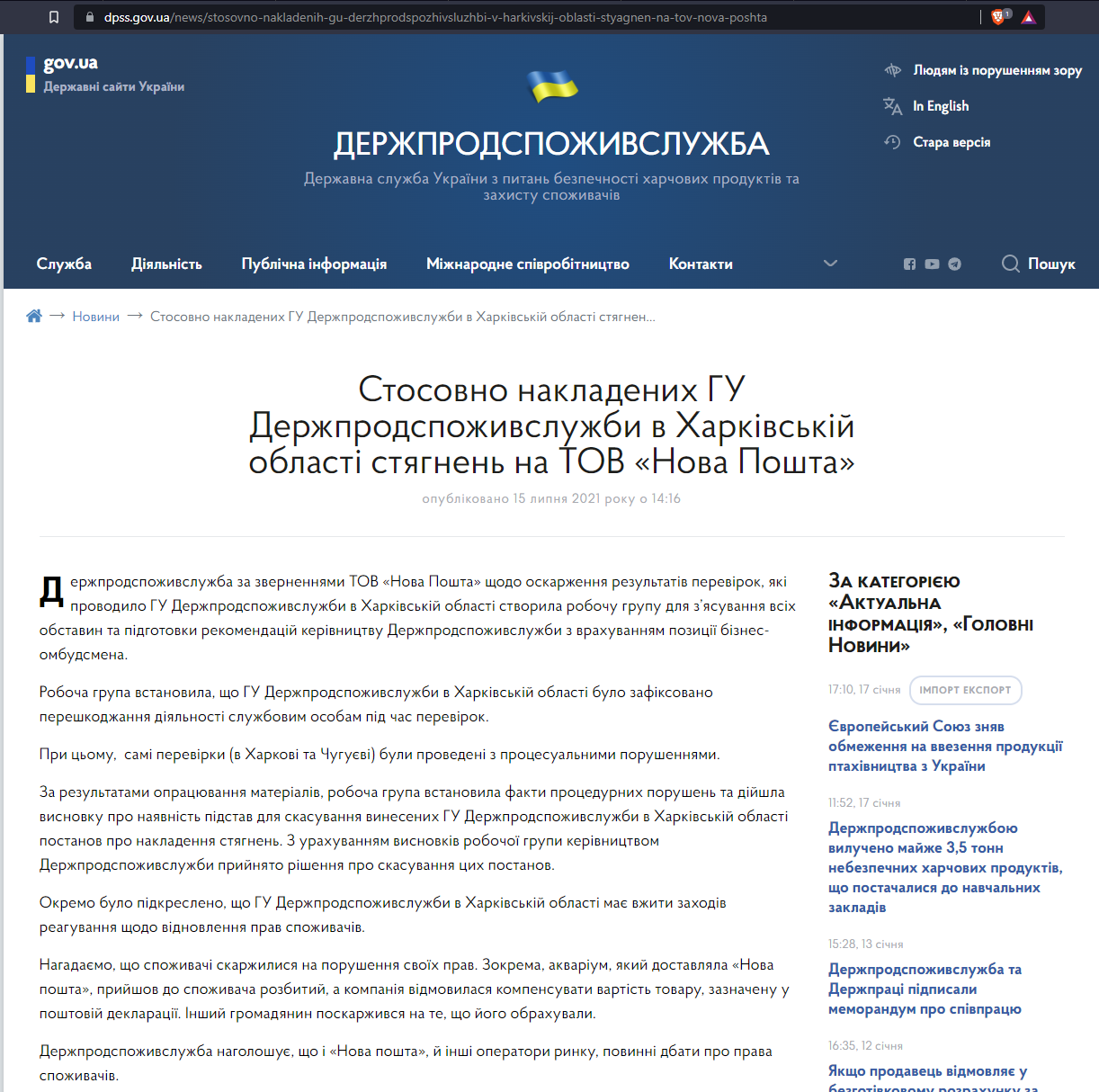 Synevo Ukraine is the network of labs all over Ukraine, which provide medical testing for individuals. Probably the biggest network in Ukraine. Owned by Medicover – public company from the Netherlands.

STSU – is pretty much self-explanatory. I’d like to add that this particular authority body also entitled to conduct inspections of business (planned and unplanned) and the “audits” (sort of) as well.

Plot: During September and November 2021, STSU made a planned inspection of Synevo Ukraine, and as the result came up with demanding from Synevo of the additional to UAH 1.1B to tax (roughly equivalent of USD 40.5M+). Should Synevo agree to the claim – it would have resulted in additional USD 7.29M of taxes and up to USD3.6M of fines. 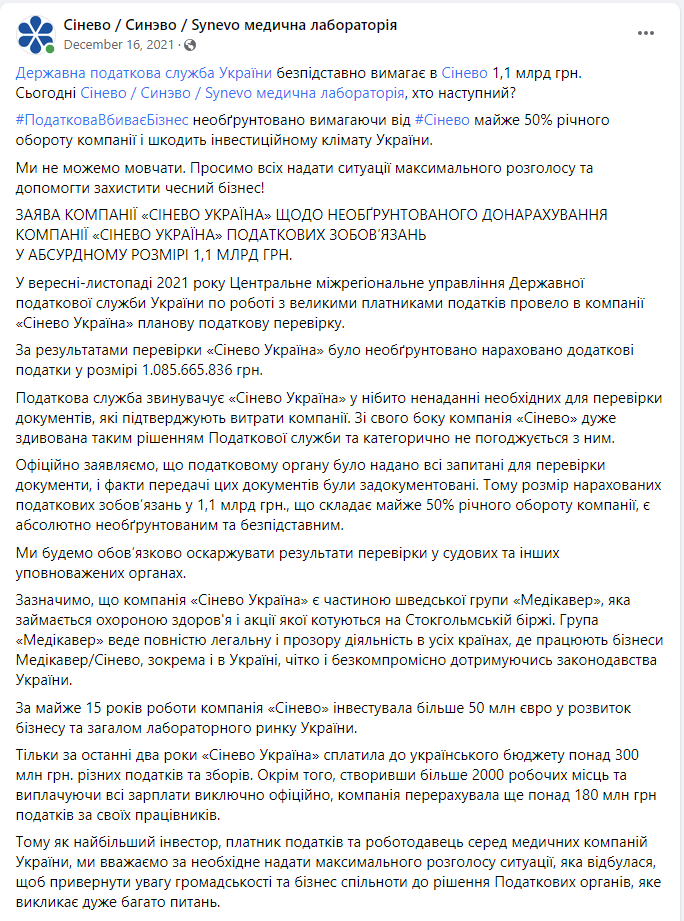 According to Synevo, STSU claims that, during the inspection, Synevo failed to present accounting documents to substantiate the tax deductibles for UAH 1.085B which resulted in STSU demand to increase taxable income figures for respective amounts. I should mention that the STSU’s claim in inspection act “failed to present the documents…” is the very typical one, which widely used in most of cases, regardless the size.

So, do you see the pattern here? Again: huge amounts, raise the risks, force them to negotiate. Same tactics.

Synevo Ukraine had followed the suite of NP and made some PR efforts in order to win in the court of public opinion should I say. They clearly didn’t have as much weight as NP, however did manage to cover their story through some media and popular public figures. The same Nova Posta’s co-founder gave them his support as well. And in a few days Synevo had rushed to celebrate their victory. 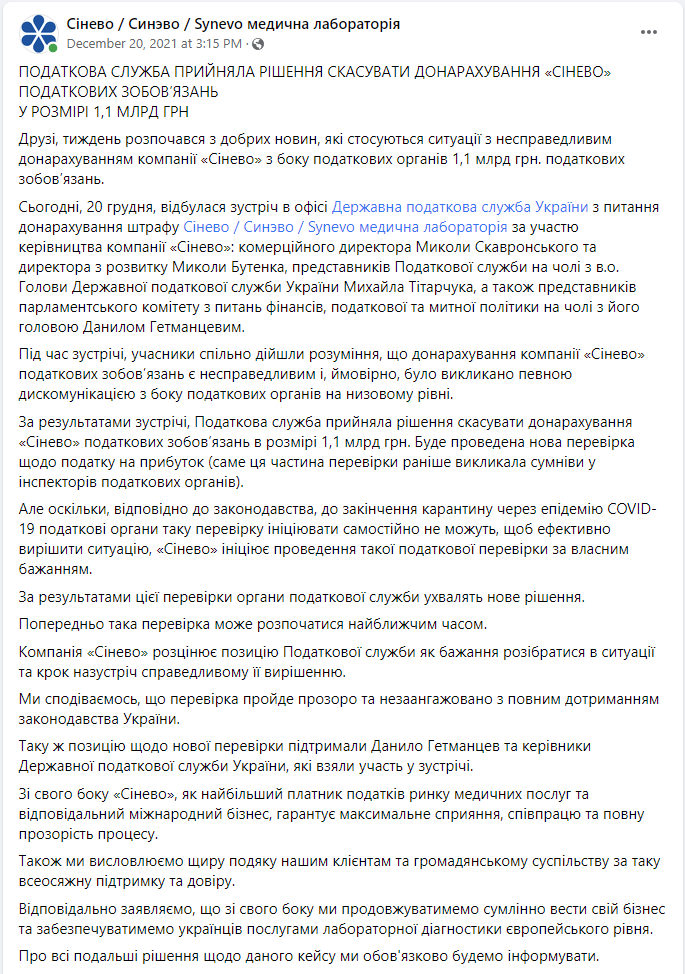 Synevo claimed that the demand of additional taxes from STSU was canceled (which is true, but only partially. According to their own text, STSU did cancel this particular demand, but, at the same time, they have negotiated the re-make of the same inspection with, probably, the same representatives. I would speculate that they will have to agree to a lesser amount of fines and extra taxes after the re-inspection when the hype is down. Synevo has also openly mentioned in their info that they had involved the company’s management, head of STSU and some MP from parliament committee on finance. It looks very much like they had a bargain and have reached the agreement on cost.

Both of those cases are very typical for Ukraine and they’ve been so for as long as I can remember. Same goes not only for relatively big businesses but for small one as well. Same patterns, different levels of actors. I hope this illustration will help with broader understanding of local practices.

This site uses Akismet to reduce spam. Learn how your comment data is processed.